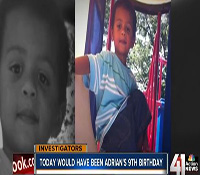 Scripps NBC affiliate KSHB-TV Kansas City conducted a three-part investigation into the death of seven-year-old Adrian Jones. The station uncovered footage from inside the boys home showing his mother and stepfather repeatedly abused him until his eventual death. Adrian is believed to have died in September or October, but his body was found in November in the familys livestock pen. In response, Kansas State Representative Louis Ruiz introduced Adrians Act to strengthen child abuse laws. The parents now face life in prison.