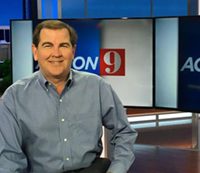 The Orlando Sentinel recently profiled Todd Ulrich, a well-respected, long-time consumer investigative reporter with Cox Medias ABC affiliate WFTV Orlando. Todd Ulrich is a champion for trust, said Holly Salmons, president and CEO of the Better Business Bureau in Central Florida. We appreciate his love for transparency and ethics. His tenacity has helped countless consumers and has helped to drive a larger divide between the good guys and the bad guys in business.

Ulrich receives more than 250 requests per week and reports roughly 100 stories a year. WFTV contacts the business even if a story doesnt air and keeps a database of complaints so Ulrich can look for patterns. Many stories involve restaurant inspections and used car sales. As Florida is one of the few states with no used-car sales protection, these stories often affect low-income families.

Other recent stories have included local grocery stores with poor inspection histories, a new automobile scam on Facebook and a local man who lost $28,000 in a social media scam. Viewer Kevin Nowak had trouble with his refrigerator from Sears Home Services for more than a year. Within a month of Ulrichs contact with the corporate office, Nowak received a replacement. Some business people hurl insults at Ulrich when he confronts them. Youre the biggest piece of garbage, and Im sure that will be edited out, said one. Ulrich does not let this bother him. I consider myself a consumer advocate along with being a consumer investigator, he said.