KTHV-TV Investigates Cause of Slow 911 Dispatches 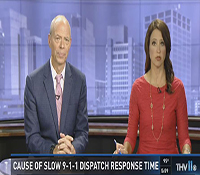