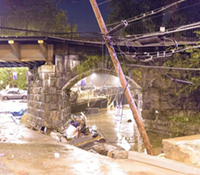 Hearsts WBAL-AM, WIYY-FM and NBC affiliate WBAL-TV Baltimore provided viewers and listeners with crucial information as deadly flooding hit Ellicott City, MD on July 30. The flood killed two people and destroyed numerous residences and businesses. In the weeks following the storm, Hearst held several fundraisers. Hearst also partnered with the Baltimore Ravens on an I Love EC t-shirt to support Ellicott City. The stations sold out of their 700-shirt supply during the first fundraiser. Ravens players wore the shirts at an open practice and made 50 autographed shirts available for a raffle. As of August 16, Hearst sold over 3,600 t-shirts and raised $36,720.