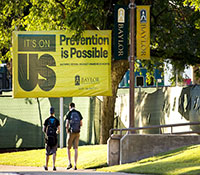 Graham Media Groups NBC affiliate KPRC-TV Houston investigated how Baylor University handles allegations of sexual assault after several woman came forward claiming the university failed to properly handle their claims. An Austin attorney representing Baylor informed KPRC the university would not release the records until the Texas Attorney Generals Office ruled on whether those reports were subject to open records law. Many legal experts say that the school is circumventing the law and should be required to release the records.