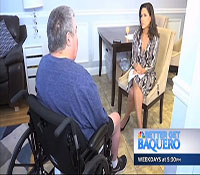 NBC owned-and-operated WNBC New York City reporter Lynda Baquero host the Better Get Baquero investigative series, which has helped recover more than $1 million from scammers. With something like this our audience can reach out to us with a specific problem and we can help them individually  at the same time were also passing along consumer information that can impact a larger audience, Baquero said. The people helped include a man who had been over charged $2,400 by a student loan company, a woman was denied cancer treatment by her insurance company and a man who lost $4,000 to E-Z Pass because he did now know about a residential discount. The show also helped woman who received a $67,000 bill by her insurance company for an emergency medical helicopter transport because it had not been pre-approved in the moments before she collapsed and nearly died. A similar segment at Telemundos WNJU has recovered almost $1.5 million for consumers.