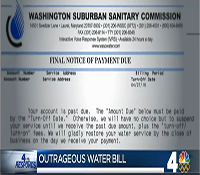 NBC-owned WRC-TV Washington, D.C. helped local resident Ricardo Torres fight a $189,000 water bill in late May. Torres utility company threatened to turn off his water if he didnt pay his April bill, which included $180,918.68, plus $9,000 in late fees for 1,500 square feet. Within hours of reporter Susan Hogan contacting the utility company, they admitted it was a meter reader error and dropped the bill.