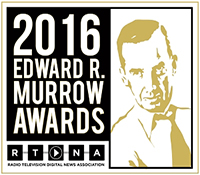 The Radio Television Digital News Association (RTDNA) has announced the winners of the 2016 National Edward R. Murrow Awards, which recognize outstanding work produced by radio, television and online news organizations around the world.

"Our judges tell us the work they reviewed this year is some of the best ever," said RTDNA Chair Kathy Walker. "Our winners have clearly demonstrated how their commitment to outstanding journalism serves their communities, states and the nation."

This year, the 45th anniversary of the awards, RTDNA is presenting 103 national Edward R. Murrow Awards in 13 categories including Newscast, Investigative Reporting, Overall Excellence and more. RTDNA received more than 4,300 entries during the 2016 awards season, setting an all-time record for the fourth year in a row.

For the third year in a row, ABC News Radio and ABC News (television) both won the Edward R. Murrow Award for Overall Excellence at the network level. ABCs radio team also won awards for Breaking News and Hard News. ABCs television team won for Breaking News, Series, Use of Video and Website.

In the network radio division, National Public Radio took home awards for Investigative Reporting, Series and Writing. This American Life won for Continuing Coverage (with WBEZ) and Documentary. CBS Radio News won for Newscast. ESPN won for Feature Reporting, and KQED and the Food & Environment Reporting Network won for Use of Sound.

The Washington Post won the Overall Excellence Award in the large online news organization division as well as awards for Writing and Continuing Coverage. The New York Times won for Breaking News, Series (Video) and Use of Video. Yahoo News won in the Documentary category, The Seattle Times won for Hard News, The Guardian (US) won a Murrow for Investigative Reporting, The Denver Post was a winner for Sports Reporting, The Detroit Free Press won for Feature Reporting, The Star Tribune from Minnesota won for Website (Video), The Milwaukee Journal-Sentinel won for Website (Audio) and National Public Radio and ProPublica won for Series (Audio).

In the Small Online News Organization division, Reveal from the Center for Investigative Reporting took home a remarkable quintuple win by taking awards for Overall Excellence, Continuing Coverage, Feature Reporting, Documentary, and Website. In Large Market Television, WXIA-WATL-TV in Atlanta scored a triple win for Continuing Coverage, Investigative Reporting and Writing. In Small Market Television, WVUE-TV in New Orleans had a double win for Series and Use of Video. In Small Market Radio, WITF-FM in Harrisburg, Pennsylvania had a double win for for Hard News and Use of Sound. And in the Large Market Radio division, three stations had double wins: WLRN-FM in Miami, WBUR-FM in Boston and WAMU-FM in Washington, DC.

"We present the Murrow Awards not only to recognize outstanding journalism, but to inspire radio, television and digital newsrooms across the country," said RTDNA Executive Director Mike Cavender. "Journalists can learn from each other and push each other to find new and better ways to serve their communities."

To receive an Overall Excellence award, a news organization must exemplify the highest standards in serving its audience through quality electronic journalism.

The winners will be recognized at the RTDNA Edward R. Murrow Awards Gala at Gotham Hall in New York City on October 10.