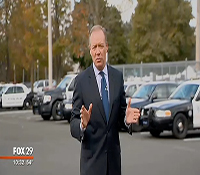 Fox owned-and-operated WTFX-TV Philadelphia Investigative Reporter Jeff Cole helped a viewer get compensation after a city sanitation truck hit her parked car. At first the city denied the claim, but within an hour of Cole getting involved, the city called him and said that they would cover the residents repair expenses in full.