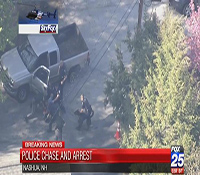 Cox Medias Fox affiliate WFXT-TV Boston aired FOX25 Investigates: State Police logged 900 pursuits in 5 years on June 2. Investigative reporters Eric Rasmussen and Erin Smith found that Troopers on police pursuits have racked up 132 crashes involving cruisers and other vehicles since 2012. State Police have logged 917 total chases in the past five years. State Police said 843 of those pursuits complied with the agencys pursuit policy, which requires cops to end the chase if the driver is only wanted for a misdemeanor or nonviolent felony and heads into densely populated neighborhoods or congested roadways.