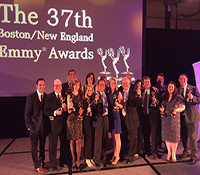 Hearsts ABC affiliate WCVB-TV Boston won regional Emmys for breaking news coverage and investigative reporting. Chief meteorologist Harvey Leonard was honored with the Governors Award. Leonard has been a meteorologist in New England for more than 40 years. WCVB also picked up wins for best breaking news coverage for the Dzhokhar Tsarnaev verdict, and 5 Investigates Kathy Curran won for Best Investigative Reporter. WCVB was nominated for 58 Emmy Awards this year, more than any other TV station or media organization in New England, and more total nominations than the next two most highly nominated Boston stations combined.