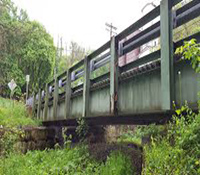 Media Generals ABC affiliate WHTM-TV Harrisburg, Pa. aired an investigative piece on May 10 on the states structurally-deficient bridges. Reporter Dawn White showed that the state has the second highest number of structurally deficient bridges in the country. White combed through hundreds of pages on bridges supplied by PennDOTs Right-To-Know officer and found that more than 500 bridges do not meet structural and legal requirements. There are 136 faulty bridges in Lancaster County alone. Watch more here.