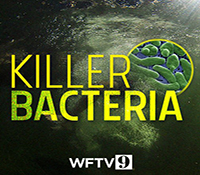 Cox Media Groups WFTV-TV Orlando aired an investigative story on May 1 in which reporter Christopher Heath highlighted the fact that scientists from Florida Atlantic University have discovered a new link between peoples exposure to a deadly bacteria in Florida lagoons and estuaries known as Vibrio and their consumption or handling of raw and uncooked fish or shellfish.