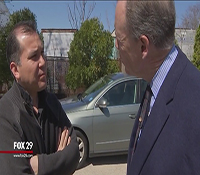 Fox owned-and-operated WTXF-TV Philadelphia investigated the relationship between an area priest and his former secretary. After receiving a tip from a parishioner, the station discovered that Father Joel Arciga-Camarillo was spending almost all of his time away from the church, including complete evenings, at the home of his former colleague. The report led to the Diocese of Camden to open its own investigation. Father Arciga-Camarillo was eventually reassigned.