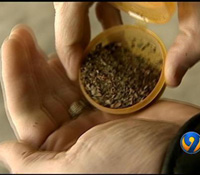 Cox Media Groups ABC affiliate WSOC-TV Charlotte aired a story that inspired Senator Tom McGinnis to file legislation against the herb Kratom. WSOC talked to Lauren Eden, whose son John killed himself in May 2015. Johns Kratom usage sky rocketed after he took it to treat depression. Supporters say that Kratom, which is advertised on billboards, treats diabetes, pain, depression and addiction. The FDA says it poses a public health risk with the potential for abuse. North Carolina would be the sixth state to ban it.