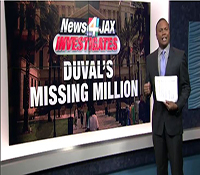 Graham Media Groups WJXT-TV Jacksonville, Fla. aired an investigative report on February 8 showing that the city was prepared to write off millions of dollars of municipal property found to be missing or stolen over the past several years. WJXT analyzed a list of hundreds of missing or stolen city equipment from June 2014 to July 1, 2015 that included courthouse video systems, ice machines, breathalyzers, and even bullet proof shields. The purchase prices of the items on the list totaled $1.2 million. One week after the report aired, new legislation was introduced to the council authorizing the director of finance to delete all unaccountable items from their books from 2010 to 2016.