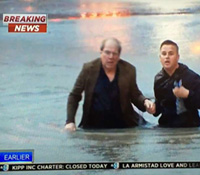 Broadcast television stations that shared video of their reports on the Houston floods with TVNewsCheck included TEGNAs CBS affiliate KHOU-TV, Fox-owned KRIV, ABC-owned KTRK-TV, and Graham Media Groups NBC affiliate KPRC-TV. KTRK Houston reporter Steve Campion helped a man to safety during the floods that submerged much of the Houston area on April 18. Campion was about to go live on-air when he noticed a car slowly sinking into nearby and a man crawling out of the door. He helped the man to safety seconds before the car became fully submerged. View video of the rescue.