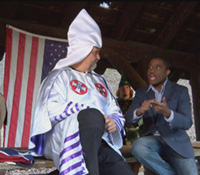 Raycoms NBC affiliate WWBT Richmond, Va. aired a series of stories on hate groups after seeing KKK recruitment flyers in mailboxes. African-American reporter Chris Thomas met with the Imperial Wizard for the Rebel Brigade of the Knights of the Ku Klux Klan in the Jefferson National Forest. Klan members wore shirts that said Original Boys from the Hood during the interview. The Southern Poverty Law Center (SPLC) estimates there are 32 active hate groups in Virginia.