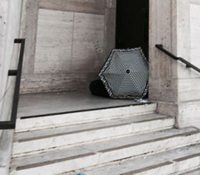 CBS Radios KCBS-AM San Francisco won the Society of Professional Journalists Sigma Delta Chi Award for Best Investigative Reporting in Radio for the five-part series Unholy Water. Reporter Doug Sovern exposed the San Francisco Archdiocese for installing an illegal plumbing system at St. Marys Cathedral, which poured water on homeless people at night (despite historic droughts) to keep them from sleeping in the cathedral doorways. Soverns investigation resulted in action from city building officials and the Archdiocese, who transferred the Bishop to another parish and created new programs for the homeless. The LA Times, Washington Post, BBC and Al Jazeera picked up the story. We have a sacred trust from the public, and a powerful platform with which to fulfill that trust, Sovern told Radio Ink. We were able to shine the spotlight on wrongdoing and get it stopped. That is always the best reward of all.