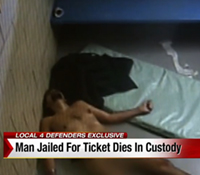 Graham Medias Groups NBC affiliate WDIV Detroit won a regional Edward R. Murrow Award for Continuing Coverage for Its A Hard Thing To Watch A Man Die. WDIVs investigators examined 240 hours of video that showed that while David Stojcevski spent 16 days in jail for a traffic ticket, he suffered from serious drug withdrawal and lost 50 pounds before dying on the floor of his cell. The FBI is now looking into the case. We are honored that our news team continues to make a difference, and effect positive change in our community, said General Manager Marla Drutz.