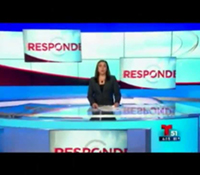 Telemundo launched "Telemundo Responde" (Telemundo Responds) on KTAZ Phoenix and KHRR Tucson on April 18. The initiatives consumer advocacy team answers inquiries from local residents who are victims of identity fraud or theft, received fraudulent charges or whose employers refused to pay for their work. "Telemundo Responde will give a voice to the voiceless," said investigative reporter Victor Hugo. "With the expansion of Telemundo Responde to Arizona, our communities will now have an opportunity to get real answers to the consumer problems they face every day."