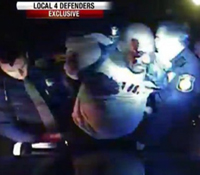 Graham Media Groups NBC affiliate WDIV Detroit received a Michigan Press Association award for the advancement of justice. A Journey to Justice examined the story of Floyd Dent, an African-American man who failed to stop at a stop sign. He was pulled from his car, punched in the head 16 times and arrested for assault, resisting arrest and possession of cocaine. WDIV showed that a police officer pulled a baggie of cocaine from his own pocket. As a result, arresting officer William Melendez was fired and sentenced to 13 months in prison, two other officers were suspended and the police chief resigned. A law has been proposed to track officers who resign under investigation. The county prosecutor cited WDIVs reports for alerting her to the case.