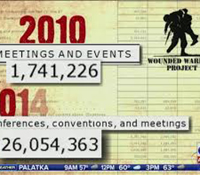 A CBS News investigation led by Chip Reid led to the board of the Wounded Warrior Project firing its CEO and the COO. CBSs Scott Pelley broke the news on March 10. Reids investigation revealed that Wounded Warrior Project spent 54 - 60 percent of the donations it received on veterans services. Other organizations spend more than 90 percent on veterans.