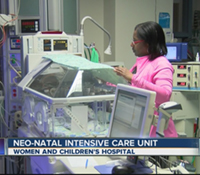 E.W. Scripps ABC affiliate WKBW-TV Buffalo raised $1 million in the Variety Kids Telethon, held March 5 to benefit the Women and Childrens Hospital. The telethon featured Ashton Ross Smith, who battled a severe respiratory infection and pneumonia when he was six weeks old. Ross and countless other children are now thriving because of the care they received at the hospital.