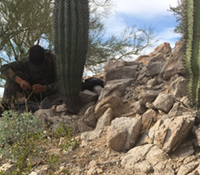 Merediths CBS affiliate KPHO-TV Phoenix discovered observation posts where Mexican drug cartels watch law enforcement. While riding through the desert, investigative reporter Morgan Lowe and Detective Eddie Castro saw distinctive water bottles and trash. The next day, Lowe and his producer pretended to be hikers. After meeting a man dressed in camouflage who had a cell phone, two-way radio and police scanner, they found the observation point. Lowe risked his life to photograph supplies stashed between boulders, including solar panels for charging electronics and a cooking area.