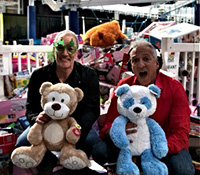 The amount of generosity from our listeners today was incredible, said Chaz. We are going to make a lot of kids happy this holiday season.